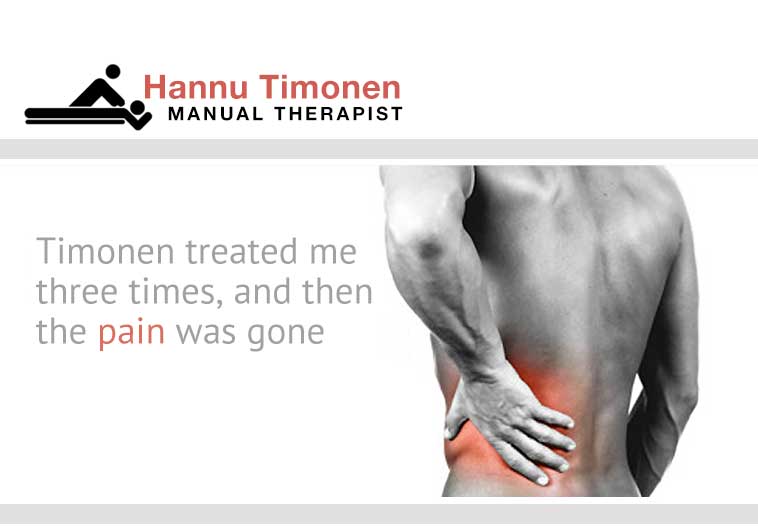 Hannele Dravantti was considered as having rheumatism until fibromyalgia was finally given as her diagnosis 8 years ago. For a period of 2 years she consumed medication prescribed to her for the treatment of rheumatism as well as several different types of pain killers from the pharmacy. Sleeping was very poor and limited to only a couple of hours per night.

None of the medications had any positive effect on Hannele and the pain continued. Hannele Dravantti happened to hear about Hannu Timonen and decided to get in contact with him securing an appointment rather swiftly.

“I had a trip coming up in 3 weeks time, which would take me nearly 24 hours to complete by airplane and bus. I wondered to myself how I possibly would be able to sit for such a long period of time considering the poor condition my back and shoulders were in”.

My first session at Hannu’s was an unforgettable experience. Hannele had been diagnosed with the maximum 18/18 tender points. “I was a bit worried that Hannu would break me into little pieces”, but already the next day I felt better. The rest of her treatments which consisted of 4 long sessions and 1 short one during a 3 week period were rapidly completed, just in time to have Hannele in great form for her coming journey. Hannele threw out all her medications!

“I had reflux disease and other stomach ailments which made it very hard for me to consume painkillers”. Hannu healed my body without the use of any medication and is the only one I trust to treat my spine and vertebrae. Hannele began studying for a new profession in the field of arts which required great hand precision and was also very demanding. Upon completing her thesis Hannele’s muscles had become rather stiff, and once again she sought Hannu’s expertise. “Plain laziness was the culprit here”, as Hannu firmly states. “Daily conditioning is a vital part of maintaining ones health after his treatments.